Pic Info:
Hair:  Doe – Poppy Hair Gacha @ Whimsical
Sunglasses:  Izzie’s – Splish Splash Wet Sunglasses @ mainstore & MP
Water Droplets:  Izzie’s – Wet Body & Face Appliers @ mainstore & MP
Bathing Suit:  Nerido – Qtee Bikini @ Whimsical
Drink:  ChicChica – Margarita @ Equal10
Pose with Floaty Prop:  BellePoses – Naomi Poses @ Whimsical
Swimming Pool & Pups:  Jian – Fun In The Sun Frenchies Gacha
One of my favorite things to do during the summer is to be out in the sun and near water.  I prefer a beach, but since I live nowhere close to one at the moment, then the pool is where you can find me.  You’ll catch me on a lounger with a stack of magazines and a little cooler full of some kind of tropical fruity drink.  So I thought this was the perfect submission for our Flickr group’s challenge this month, the four seasons.
Since it’s getting close to summer, the designers of SL are also starting to put out all of their summer inspired creations.  You can find several of the items in my picture at the current Whimsical & Equal10 events.  Let’s talk about some of these cute creations, shall we? 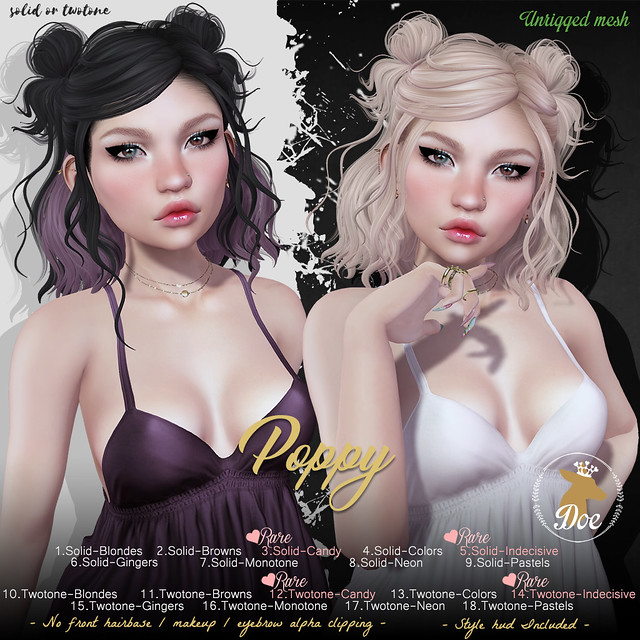 //embedr.flickr.com/assets/client-code.js
First up, is one of my favorite hair designers, Doe.  She has the Poppy Hair gacha at Whimsical.  This is an adorable pigtail/medium length hair style.  It comes in solid and two-tone versions.  There is also a style HUD that allows you to add/remove some of the hair wisps that dangle down in the front and on the sides.  There are a couple of things to be aware of about this hair, that might make you less than thrilled about it.

It is unrigged.  This isn’t a huge deal.  I think we’re all used to short or updo styles being unrigged, and it’s a good thing.  It allows you to adjust it to fit perfectly, and since most unrigged styles are short or updo styles, you rarely run into issues with the hair clipping into your body with your head movements or poses.  The problem this hair encounters though is that it’s not quite short enough to remove all clipping issues.  There are times with my head movements, that the sides will clip/dig into my shoulders (see pictures).  Is that a big enough deal to you to never wear it?  I say no, because I still love the hair and the style.  Butta disagrees though.  So you be the judge!

The other thing that might make people shy away from this hair, is that it definitely looks best if worn with a hair base.  I used to hate and loathe having to wear a hair base.  Most just looked so fake, I had the hardest time mastering my Catwa HUD and getting the colors to match the hair, some hair bases I really liked the realistic look to them but then it would take off my makeup…it was a nightmare for me.  But I’ve practiced and finally gotten the hang of all the tricks to wearing mu
ltiple layers on my Catwa HUD and have found a few hair bases I really think look nice.  I highly recommend any of the ones from Just Magnetized.  Now, I kinda like wearing hair bases and I think it definitely makes some of the hair styles come together better.  But if you’re one of those that just can’t be bothered, then here’s your heads up about the Poppy Hair. 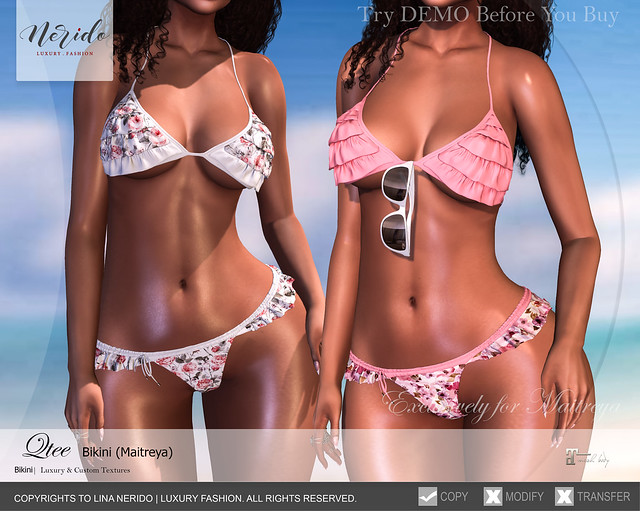 //embedr.flickr.com/assets/client-code.js
Next up, is the Nerido Qtee Bikini at Whimsical as well.  I love the name! lol  It’s a very cute ruffled bikini, with a sexy little peek-a-boo.  It comes in several floral pattern options as well as several solids.  In order to mix & match like she has in the picture, you have to either purchase a solid and floral pattern separately, or purchase the fatpack obviously.  The single purchases gives you the same color/pattern for both top and bottom.
I love Nerido’s bright, beautiful colors and textures.  Her textures are true to what you see.  Her whites are white, her blacks are black.  That might seem like a silly thing to say, but trust me.  There are some designers where Butta & I seriously wonder what freaking windlight they must be using when designing things, because the whites always look like grey and they’re blacks look like they’ve been ran through the wash with some bleach or something.  This is why it’s always smart to demo things before buying, and hopefully they offer a demo HUD with a full range of color options for you to try.  If they don’t…then maybe you shouldn’t spend your hard earned Lindens on their items.  Just sayin’…
The fit for the bikini is almost perfect!  It requires wearing a zero belly shape. *sobs*  I have a bone to pick with you Ms. Lina Nerido!!!  Not all girls have 0 bellies!  This is 2018!  Gone are the days of avatars being 8 feet tall, with mile long toothpick legs, no body fat and having a stick figure!  Voluptuous and curvy is in right now!  And this includes having a little bit of a belly.  My personal setting on my belly is at 11, and I know Butta’s is a little more than mine (maybe 16?).  But you wouldn’t believe how many compliments we get, especially Butta, about our “natural looking” shapes.  And not just from dudes trying to get into our virtual panties either! lol  Women as well as men comment.
What’s frustrating about this for me, and why I’m pointing it out, is I own quite a lot of Nerido items.  This was never an issue for me with any of her items until just a few months ago.  I played one of her gachas that had panties in it, and none of the panties fit unless I wore my belly down to zero.  Girrrrrl, why the change?!  Ever since, every time she has panties or a bottom like this bikini, it won’t work with my little belly.  I’m not a designer, so I don’t even pretend that I know how this stuff is done, but I don’t have this issue with other designers lingerie, panties, bikinis, etc.  Anyways, I’ll get off my soap box… 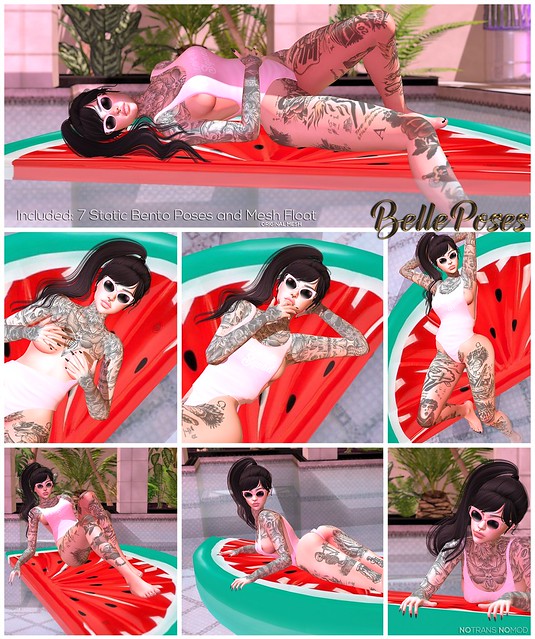 //embedr.flickr.com/assets/client-code.js
The last thing I want to talk about is the Naomi Pose set from BellePoses at Whimsical.  They are one of my favorite places to shop for photography poses and props.  She has a lot of unique ideas for her creations, and I think the poses are great.  I do have a little complaint about this set though.  I’ve contacted her about the issue, and if she gets back with me about it, I’ll update here and let ya know what she says.
My complaint though, is that the prop float is full bright and no modify.  Big deal you say?  Well, this is clearly a photo prop.  It’s not meant to be an actual floaty you rez out into your pool so you can float on.  It’s strictly for photography purposes.  But making it full bright, you can’t get any shadows to show on it and it reflects shadows off onto your avi in a bit of a weird way because of it.  You can make your own shadows in PS, but let me tell you…it’s not that easy.  Especially if you have in world shadows already and you’re trying to match up shadows for a realistic effect.
I did my own shadows on the float through PS, and even though I think I made a good attempt at it…I’m not really happy with the outcome.  Other people with much higher graphic skills than me I’m sure could have done even better than I did.  But I don’t want to spend hours on a photo editing and painting in my shadows, when it could easily be fixed with either a non full bright version, or at the least, making the float modifiable so I could do it myself.
So I’ve contacted the creator to see if there’s a way to get a modifiable version (which I highly doubt she will be willing to do since she advertises in her profile “All items are non-modify”) or if she would mind sending me copies that have the full bright turned off.  Keep your fingers crossed for me!
That’s it for now!  For any information on the items I didn’t discuss, click the links to the events, mainstore locations or marketplace up above.  Or feel free to message me in world.  It’s pool time now, see ya soon!